What is publishing’s next iteration? Every once in awhile I like to take a look to the future to see where publishing might be headed. As I “guess ahead,” I see several trends that I believe will affect how we read and what that might mean for publishing and writers. This is the first part of a multi-part examination of publishing’s future.

The Rise in Audio Downloadable Books

Audiobooks have traditionally occupied a small, dark corner in the publishing world. In the past, very popular physical books generally also were available as audiotapes and then audio CDs. But when books became downloadable and we carried smart phones that could read to us, audiobooks transformed into highly portable entertainment.

Geekwire’s Frank Catalano wrote a thorough article on the rise of digital audio you can read here. He pointed out, as I have been noticing, that the rise of books being accessed in audio has been on the rise–in double digits each year–since 2013. Considering that the rest of book formats have struggled to maintain flat sales, or at best low single-digit sales, for those of us who want to stay on top of publishing trends, checking into what’s going on with audio makes sense.

I want to be clear that I’m  not predicting audio with overtake other formats. It’s much too small a piece of the pie to begin to talk like that. Plus, I believe that ebooks showed us that readers love their physical books. (Ebook sales have flattened out for at least a couple of years, and physical books have gained strength.)

The Pew Research Center earlier this year surveyed readers to find out how they consumed their books. This chart puts the sales for each format into perspective. 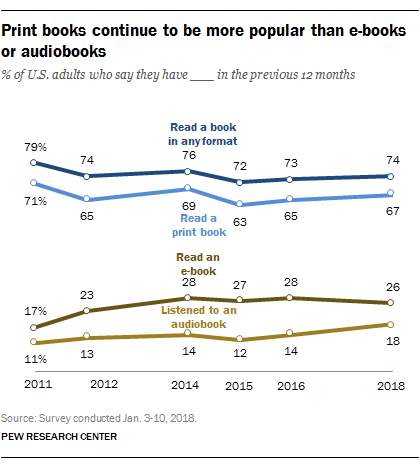 Who Listens? And What Are They Listening To?

As Catalano reports, the Pew survey showed “the sharpest uptake among two demographic groups, younger adults and college graduates. Use by each increased seven percentage points over two years. Overall, nearly one-quarter of 18-to-29 year olds have listened to an audiobook in the past 12 months, up from 16 percent in 2016.”

Both Audible, a division of Amazon, and libraries, which have seen significant increases in borrowers checking out audio versions, note that fiction is the most popular book category. For Audible, mysteries and sci-fi are the most popular specific genres. Both libraries and Audible agree that, if a celebrity reads the book, that alone can explain its popularity.

The top title over the past twelve months at the Seattle Library, which has 22,000 digital audiobooks available, is The Girl With the Lower Back Tattoo by Amy Schumer. A seemingly odd choice is also popular: Carlo Rovelli’s The Order of Time, a science book about the nature of time. But that makes complete sense when you realize Benedict Cumberbatch narrates the book. As a matter of fact, the audiobook is more popular than the ebook and is almost as popular as the print book.

What Does This Mean to the Writer?

Perhaps the most obvious take-away is that you want your book to be available digitally. If you self-publish, you can do so through Amazon’s Audible, which is a tad labyrinth but doable.

If you traditionally publish and have a recent release, your publisher probably insisted on retaining audio rights and then licensed those rights to an audiobook publisher. It took most publishers a few years to pay attention to the little slice of the sales pie labeled “audio” that grew a bit bigger every time the sales figures were studied. But eventually audio sales were sizeable enough not to ignore that revenue stream for every publisher’s titles.

Another way of looking at audio’s growth is to ask, What about launching a book in audio before any other format? The publishing industry is light years away from making such a decision, but Audible, which has a significant history of creating original content, recently released an Audible Original by Vanity Fair contributor Michael Lewis. “Rather than writing one of his 10,000-word magazine articles, Lewis created a piece for Audible and narrates it himself,” Catalano reports. I want to celebrate with our blog readers. Recently “Between the Lines” was named among the Top 50 Blogs for Writers by Freewrite. We’re thankful for the recognition and also to each of our readers, who makes his or her contribution to great writerly discussions through your comments.