The other day a business colleague phoned me to ask if I would get together with his twentysomething daughter. He described her this way: “She thinks she’s a writer. I don’t think she’s a writer.”

I responded, “Has she written anything?”

“I’ll meet with her after she’s written something.”

I wasn’t trying to be aloof; I was asking his daughter to get beyond dreaming about being a writer and try her hand at it. Why? Because writing isn’t for the faint- hearted. But you know that already.

Publishing requires a different type of courage. Some of you haven’t discovered that yet.

This week I received a three-book offer for one of my clients. He decided to spend  the weekend thinking about whether he wanted to accept the offer. That seems like a strange response, doesn’t it? And, yet, no, it’s a smart response. For signing a contract brings responsibility with it. The author is pledging to write the best he or she can; meet deadlines that often are tight; and expend time, money and every ounce of creativity he or she can muster to promote each title–while writing the next manuscript.

One of my clients, Robin Jones Gunn, developed the habit of rising at 4 a.m. to write her novels while her young family slept. And then she went back at the writing late into the night when the rest of the family had tumbled into bed. Hard choices and sacrifice are quietly and willingly made because that’s just what writers do.

But sometimes that  contractual commitment exceeds even the writer’s imagination. This week, two of my clients, archaeologist Steven Collins and his co-writer Latayne Scott, received fresh-off-the-press copies of their book, Discovering the City of Sodom. 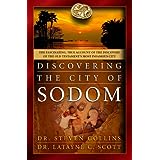 Latayne emailed me how surreal it felt to hold a copy. A veteran, published author, Latayne responded that way because of  something the reader would never know–the price Latayne paid to write the book. (Discovering the City of Sodom recounts how Steve located the famous city’s site by following the Bible’s description of where the city was located.)

Just as Latayne and Steve were in the thick of the manuscript’s creation, her husband, Dan, suffered a severe attack of the most malignant form of Guillain Barre Syndrome. The doctors told Latayne to abandon hope that Dan would recover. He was hospitalized for five and a half months (most of that time in a coma). But Latayne, who in essence lived at the hospital for those five and a half months, met the deadline.

Here’s her description of her writing conditions:

I’m still numb about seeing Sodom in print. It doesn’t seem real. When I read it, I see the dash of my car, because after Dan left the ICU he was in such small rooms with so much equipment that I could only write there late at night. Most of the writing took place (due to the graciousness of people who volunteered to sit with Dan for two-hour shifts daily) in the passenger seat of my car on a lap desk with notes stuck in the air conditioning vents, in crevices of the dash, and spread all over the other seat. My Bible sat sideways on the console. My computer had just enough battery life for the two hours each day.

If you are published, you’ve already earned your writing badge of courage. But today is a good day to renew your commitment to do what it takes to stay the course.

I salute you all for the hard, creative work you do quietly and courageously. You enrich the world. Thank you.