I’d like to cast one last look over the shoulder at 2013. Let’s talk about the best book each of us read last year.

At the beginning of 2012, I asked this question, and your answers informed my reading for the year. I discovered some wonderful new authors as a result. So I have a selfish motive–to fill out my to-read list for 2014. Hopefully you’ll discover some pretty great options as well.

I was hard-pressed to decide which book to name “the best” of everything I read. My mind first turned to two nonfiction books: The Power of Habit: Why We Do What We Do in Life and Business and Quiet: The Power of Introverts in a World That Can’t Stop Talking. Both books had an impact on my life, which I don’t often find true. A book might startle me, inform me, touch my emotions, or stir my mind. But actually change how I think? That seldom happens.

Yet, these two books didn’t make it to the top of my list. That spot is reserved for a novel my book club chose to read.

I knew from the get-go that I didn’t want to read this book. First of all, I kept mis-remembering the title, which only made it sound worse. I thought of The Orphan Master’s Son by Adam Johnson as The Orphan Maker’s Son. I figured it was a story about an assassin connected to the mob. In actuality, the story takes place in North Korea. 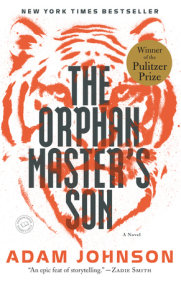 Not that awards always indicate that a book will be great read. But it’s a a pretty impressive list, yes?

The book follows the life of Pak Jun Do, who is the orphaned son of a Korean songstress and the master of a work labor camp of orphaned boys. So he has a father, but he is treated even more cruelly than the other boys because the orphan master doesn’t want to ever give the appearance of favoring his son. That would be deadly for the father. The book portrays the cruel, duplicitous, Orwellian life of North Koreans. The easy ways everyone lies to deceive each other is distressing, but the lies are so artful and creative they fascinate.

At times the book takes surreal turns that only emphasize the falsity that makes up the citizens’ lives. But the Koreans’ story-telling is part of how they keep going on with the drudgery facing them every day. They let their imaginations take them to places their bodies can never go.

While the story is a dark one, it’s also beautiful. For Pak Jun Do falls in love. In a society where being emotionally isolated is integral to survival, the choice to love is a dangerous one. It makes you vulnerable in ways you never are when you’re concentrating on taking care of yourself. As Jun Do discovers love, he finds life is about more than surviving; it’s about living to love–or dying for your love.

The complexity of North Korean relationships is expressed when, one day, a father prepares his son for the likely possibility that some day a family member must betray another one. The father demonstrates what that moment might look like by denouncing his son in ways that could only lead to his son’s death. Then, after spewing out the terrible, betraying  words, the father says, “See, my mouth said that, but my hand, my hand was holding yours. If your mother ever must say something like that to me, in order to protect the two of you, know that inside, she and I are holding hands. And if someday you must say something like that to me, I will know it’s not really you. That’s inside. Inside is where the son and the father will always be holding hands.”

It’s an intolerable life of fear, hunger, ill-health and pretense of loyalty to “Dear Leader,” Kim Jong Il. Yet it’s a wonderful story of resilience, humanity, and the joy in sacrificial love. And the writing is superb–amazing, actually.

I’ll never see North Korea the same way as a result of reading this book. Nor will I ever see despair and love the same way.

Now, you tell us, what was your favorite book that you read in 2013? It could be fiction of nonfiction, a new release or a classic that you discovered for the first time or rediscovered all over again. I’m ready to add to my list.

Previous Post: « Tips to help you have a successful 2014
Next Post: A Decade of Reflection–on Writing and Literary Agency Work