Filling in for Janet Grant who is traveling.

Novellas are the rage these days and many people are writing them or putting together collections. I’ve got four tips here for how to write a novella, based on the five I’ve written for Barbour Publishing.

With only 20,000 words or less, you have to be careful. You can’t really include much subplot, characterizations need to be simple, and you have to plan the story so it makes sense, has a character arc, and ends in the proper place without cramming in too much at the end.

If you’ve got a lot of story, like I did in The Gold Rush Christmas, it can be a challenge.

Here are the four steps I took to write a novella

1. Chart out your story.

While I had the original synopsis accepted by my editor, I had done more research in the meantime and needed to tweak it a little.

The story began in the summer of 1897 because I wanted my three musketeers, Miles, Peter and Samantha, to get caught up in the heady rush to gold-country Alaska. Since A Pioneer Christmas Collection’s stories needed to end with a satisfying romance at Christmastime, the story needed to take place over a four to five month time span ending at Christmas.

I gave each major scene its own chapter–or two, December got a little complicated.

Since I was writing a romance and that means the story is told through two points of view (POV), I noted whose head I was supposed to be in during each scene. Several times I had to switch the order of scenes when one needed to be told from, say, Miles’ POV and it was Samantha’s turn. Having the skeleton helped me keep track of that.

I drew up a matrix and spent a delightful afternoon filling in the squares. 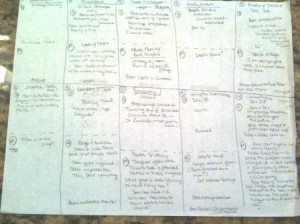 2. Figure out your ending.

I needed to know how my story was going to end before I got there, because I had to be “salting” the manuscript with items pointing to the resolution early on. I didn’t have room to write things that wouldn’t fit into the ending.

Christmas 1897, easy. But why would the couple fall in love? How would I pull off the different strands of story I had included in my proposal to the publisher?

And as I researched and found a fantastic TRUE story, how would I fit that in?

The story started in Port Orchard, Washington, that location was chapter one. I knew they would spend time on the boat sailing to Alaska and I needed to figure out what else would happen on board–so I gave them three chapters to sail.

They ended at a Tlingit village at the end of the story–they had to get there, find what they were looking for and then have the romantic moment.

That left me about seven chapters to fill with “everyday” life in Skagway, Alaska.

Peter decided to pack things over White Pass for other Klondikers. That was one chapter, or at least half of one because it was a powerful scene about what life was like that winter.

I had that fantastic true story. It turned out to need two chapters of its own–but it was the turning point of the tale. I plotted it in.

Once those significant events were placed on the chart above, I could embroider the rest of the story.

4. Let the creativity carry you away but then edit, edit, edit.

My first draft was 22,000 words long, or 10% over. I was satisfied with the story, but obviously needed to trim.

Every word had to count–particularly verbs. It’s an excellent exercise!

I turned it in at exactly 20,000 words, even including the lengthy dedication and the historical note at the end.

But when my editor got a look at it, she saw things in the story line that needed changing. We worked together–shaping, cutting, changing, shifting. It was like putting together a puzzle only we were using words–and counting them zealously.

Final tally: 19,998 words. I felt a little cheated, but too weary to stick in two more descriptive words.

I’ve always enjoyed short stories and I’d be delighted to write one again. Indeed, even as I work on my current project–a full length novel–the techniques I polished in my five novellas (The Dogtrot Christmas, An Inconvenient Gamble, The Gold Rush Christmas, The Yuletide Bride, and The Sunbonnet Bride), have proven excellent training.

Do  word counts limit your creativity? How do you manage when you’ve got shorter, rather than longer, project to write? Hard or easy?